What are Co-operative Banks?

There is overabundance of banks in India providing almost all services that an individual needs. Though, generally most of the banks that people use are either the private or nationalised banks. But, there are other banks that are used by a large number of the middle class sections of the society which are the co-operative banks.

Cooperative Banks are the financial entity that are owned and run by their customers which operate in both urban and non-urban centres. Their origin counts back to old times when need for banking was felt by the themselves and the government couldn’t help them out.

Cooperative Banks operates on the principle of one person one vote. The bank is governed by both banking and cooperative legislation as they are registered under the Cooperative Society Act, 1965 and regulated by (NABARD) National Bank for Agriculture and Rural Development and Reserve Bank of India (RBI). The bank is centred around communities, localities and work place groups and lend credit to borrowers and businesses. Cooperative bank have helped a normal rural Indian to feel empowered and secure.

Cooperative Banks provide lot of services such as granting loans and accepting deposits to the members and even to the non-members. The members of the bank are the owners as well as the customers of the bank at the same time. The bank provides various services such as deposit accounts like savings and current account, locker facility, loan and mortgage facility to the customers. 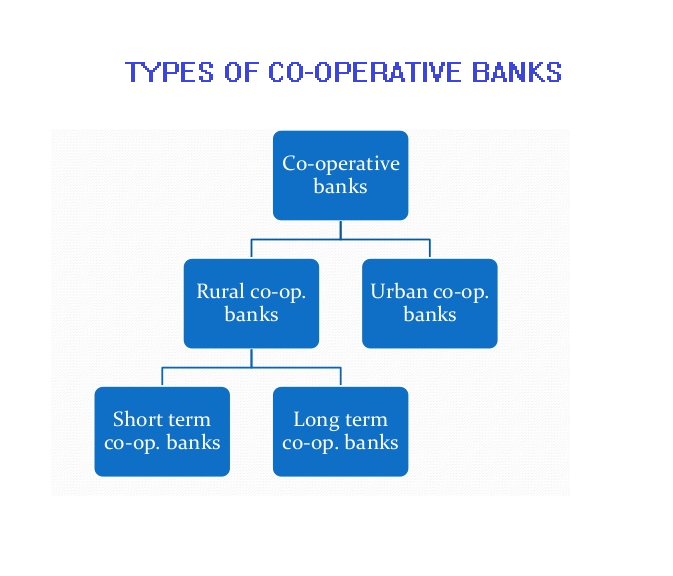 This is an association of borrowers and non-borrowers living in a particular locality. The funds in the society are derived from the deposits of members and loans and share capital from central co-operative banks. The loans are provided to members for the purchase of fodder, fertilizers, pesticides, etc.

These are of two types mainly those having a membership of primary societies and those having a membership of individuals and societies. The funds of the bank come from state co-operative banks and joint stocks which consist of share capital, deposits, loans and overdrafts. Central cooperative banks also give finance to member societies within the limits of the borrowing capacity of societies.

The Urban Co-operative Banks are the co-operative banks located in urban and semi-urban areas. Till 1996, these banks were allowed to provide money only for non agricultural use. But this does not hold today. They basically lend to small borrowers and businesses. Now, their scope of operations has broadened significantly.

Major problems in the functioning of the Cooperative Banks:

2) The duality in control by Registrar of cooperative societies (RCS) of a state as Cooperation is a state subject. But financial regulatory control by RBI has led to many problems such as poor supervision and control; there is haziness in power structure as there is no clear differentiation.

3) There is inconsistent growth of cooperative societies across India. It is said these have grown maximally in states of Maharashtra, Gujarat, Tamil Nadu while the other parts of India still do not have a heightened presence.

4) Latent membership has made them declining as there is a lack of active members and lack of professional attitude.

5) Now their main focus is being on credit so they have reduced to borrower driven entities and out of which mostly members are nominal and do not enjoy voting rights.

6) There is a broad gap between the level of skills or ability and the increasing computerisation of banks.

There has been revolutionary change in the working of Co-operative Banks. Earlier, these banks not only lagged behind in technological aspects, but also the essential requirement of being transparent was in ambiguity. Thanks to RBI and the gen-next management, these banks now tend to match the scheduled commercial banks in their working and transparency.

Olymp Trade: Is it Profitable For You??

Startup Accelerators: Looking for the best funding for your Startup?

Subscribe to get the best of finance and fintech. Regularly.

IndusInd Bank Credit Card: which one is best for you? Find now!

Olymp Trade: Is it Profitable For You??

Startup Accelerators: Looking for the best funding for your Startup?
Copyright Mint2Save © 2020. All Rights Reserved